Feeling a bit better today. Worked, worked out, had more than a few thoughts that had nothing to do with the baby, future babies or the seemingly hopeless state of my life. I'm not quite Pollyanna yet, but it doesn't all seem so bleak. I'm seriously considering taking a formal culinary course, is that weird at this late stage of the game? Not to become a chef, but just to understand cooking and food better so that I could write about it. I had this epiphany earlier this year that I would be happier if I could make a living doing something I liked (what a concept!), and since I like to write and I like to cook, writing about food seemed like a logical career path. Anyway, we'll see. There's a decent course available in town that's part of an adult ed program that is gratis (I like that!), but it's full-time for a number of months. I could still freelance on the side, but I would't be able to earn major bucks while I'm studying. We'll have to see if that's financially feasible.

Anyway, no real theme or message today. Just that I don't feel as horrible as I have done in the past few weeks, which must be a good thing. But what will I do if I don't have my misery to hang onto anymore?!
:: posted by Ann Howell, 7:25 PM | link | 3 comments |

I promise not to use gerunds for the title of every blog post, but "treading water" is just too apt a title not to use today. My mood really hasn't improved since last weekend. I've been doing my best to stay active with projects around the house, but I haven't been able to actually finish anything (beside the extremely pedantic chores of laundry, dishes, etc.). Yesterday I started digging up the front lawn in an effort to reroute our front walk from it's rather awkward current course (straight 90-degree angle from the driveway to the front steps) to a more natural, curved trajectory. Anyway, after 30 minutes I had only managed to dig up a few feet of heavy sod and I realized that this was going to be much more difficult than I had anticipated. So I gave up, hoping I could convince my better half to give me a hand when he got home. And I felt like a failure for not sticking with it. I have no stamina anymore! (Did I ever? I can't remember.) Anyway, I've got a major case of the blahs. I have no enthusiasm for anything. I can't remember the last time I had a good, deep belly laugh. I despair that I'll ever feel truly happy again. I keep trying everything that you're supposed to do to shake yourself out -- I've exercised (I took a 45-minute bike ride yesterday and just came back overheated and sweaty, as well as depressed), I make sure to eat relatively well (whole grains, fruits and veggies, etc.), I get enough sleep (okay, I probably get too much sleep -- I'm on about 9 hours a night these days), and still I feel like I'm going through life wading waist-deep in water. Everything is an effort. Anyway, I just realized how pathetic I must sound, so I'm going to stop now. I'm sure I'll snap out of this somehow. I just need to find a way out of the water and onto dry land.
:: posted by Ann Howell, 11:47 AM | link | 5 comments |

I was going upstairs earlier; it was very hot and it was rather late, so I was tired and moving slowly. As I was climbing the stairs laboriously, I had this brief vision/feeling of being heavily pregnant -- much more pregnant than I was with Lydia -- and lifting my heavy body up the stairs. I could feel the weight of my belly and the exertion it put on my legs and for the briefest of moments I could also feel the anticipation of the baby, the feeling that soon she would be here and I would have someone else to look after. In that fleeting second I felt overwhelmed, but happy. But of course as quickly as this moment came, so did reality come crashing back. I long so much for that moment to be the reality and not just my delusion. Sometimes my delusions are comforting, though.
:: posted by Ann Howell, 11:24 PM | link | 1 comments |

Need a kick in the pants

I'm not that depressed about the arrival of AF yesterday morning (with a vengance, I might add). Really, I'm not. At least it's a sign that everything is in working order (if I'm getting a period, I must have ovulated, right?). But I am depressed with just about everything else in my life. My freelance work has all but dried up recently, and I have no enthusiasm to go out and pitch my "corporate communications" services, even though I really need to contribute some income. As well, there's so much that needs to be done around the house, but most of the important projects are not financially feasible right now, and I can't seem to work up the energy to get started on all the little projects (mostly reorganizing the various rooms in the house that have turned into large storage lockers for all of life's ephemera that don't have a proper place). Part of it is a whiny, "it's not fair" kind of feeling -- I should be looking after a 10 month old baby right now. I should be joyfully worn out from constant feedings and sleepless nights, not from a general malaise/ennui/case of the "blahs". But "should, should, should" isn't very helpful. Anyway, today's mission is to do *something*. Getting out of the house would be a good start...
:: posted by Ann Howell, 9:38 AM | link | 1 comments |

Waking up yesterday morning and hearing the news about the terrorist bombings in London brought me back to how I felt on 9/11. Thankfully this latest attack was on a much smaller scale, but as we have close friends in London (who take public transport everyday) and we had just been there a couple of weeks ago, the story seemed very close. I was rather anxious until I got word that my friends were safe and sound. I spent the day listening to the BBC and NPR, waiting for news about the perpetrators and casualty numbers, even after it was apparent that most of the relevant information had been dispersed in the first few hours. By the end of the day, reporters seemed focused on how London commuters were getting home, stopping passersby and getting them to talk about their homeward journeys, often involving walking around for hours trying to find a cab or a bus that was functioning. By then it was obvious that the city would survive, Londoners being the tough lot that they are. Life goes on...
:: posted by Ann Howell, 9:21 AM | link | 0 comments | 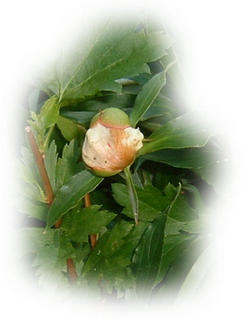 I've been spending a lot of time in the garden lately, partly as therapy, partly in effort to tame my beds that have become horribly overgrown after being neglected last summer. As I was deadheading my peonies -- the staple of the garden, if it weren't for them, it would all be a real mess! -- I noticed a number of buds in various stages of bloom that never fully flowered. Some of them were tight, hard balls that had barely developed at all and others were almost completely formed and on the brink of blooming but for some reason stopped just short of opening. Looking at them made me think of a correlation between these buds and various stages of pregnancy loss. The small, barely visible buds being early miscarriages; pregnancies that nature decided would never have a chance at ripening. The more fully formed buds were then later losses, stillbirths. Babies that almost made it all the way to birth, but were thwarted at the last moment by some unknown force. In the case of the peonies, it may have been that they were angled such that they lacked that last bit of sunlight that would have brought them into bloom, or that their stem was imperceptibly damaged so that they couldn't get enough water. Or maybe it was nothing specific, maybe there was no reason at all why they stayed partially enclosed in their green sockets while adjacent buds burst forth with healthy, fragrant blooms.

It was somewhat comforting to think about how indiscriminate Nature was -- taking these flowers just as it had taken my daughter. I had so often blamed myself for my daughter's death, either concretely by damaging her health in some way or more obliquely by not being worthy of bringing her alive into the world. This guilt plagued me at a very conscious level in the weeks and months following the loss, and has slowly subsumed into a vague malevolent cloud that surrounds every thought I have about my daughter and her death. So seeing these stunted buds has helped me to start to let go of these negative and damaging feelings. I am slowly cultivating some hope that I will have a healthy baby someday, that I am not doomed and that it wasn't my fault that my daughter didn't survive. I know it will take some time to dispel these thoughts that have plagued me for over a year now, but it feels good to finally see a glimmer of hope.
:: posted by Ann Howell, 7:40 PM | link | 2 comments |