Why has it been over 2 weeks since my last post? I've been wallowing, in a funk, overwhelmed by malaise and ennui. I keep starting posts in my head, but in the end I can't find anything interesting to say. I feel stalled and it's taking all of my energy just to get through the basic drudgeries of life. I've tried exercising (albeit somewhat half-heartedly), pouring myself into work (ditto), and on a couple of occasions bingeing on wine and chocolate. But besides hangovers and stomach aches, there hasn't been much of a result.

So, I don't know what else to say at the moment. I'm hoping this is a temporary state, because all of this moping and sighing is *very* tiring. 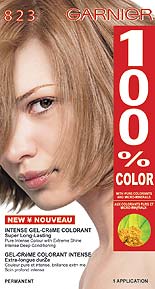 One small thing to be happy about today: I have found the almost perfect shade of hair color. I have been coloring my dark blonde hair since I was in high school (it was the one beauty treatment that my mother approved of, mostly because she started covering her grey when she was in her 30s, so it was a process she couldn't help but condone), but until recently I've always tended to go too light. I stopped coloring it when I was pregnant, and since it was a while before I was up to any kind of self-beautification, my hair finally grew all the way out and I got to see how dark my natural color really was. Since then, I've been trying different shades, trying to strike a balance between mousy and tarty and I think I've found it. Woo-bloody-hoo.

Well, I've got a busy evening ahead of me, lots of moaning, complaining and feeling sorry for myself to do. At least my hair will look fabulous while I do it...

P.S. Thanks to Anam and Msfitz for checking up on me! It's nice to know we're all looking out for each other here in blogland. It really means a lot to me, especially during these difficult times.
:: posted by Ann Howell, 3:59 PM | link | 6 comments |

When a good day goes bad

Yesterday started out pretty well. I got the go-ahead for my next work project and then I had a surprisingly pleasant call to Lexmark customer support, ending with the agent offering to send me a replacement printer. But the day ended with a decided thud. I got an email from my husband's best friend (who lives in England) saying that he was recovering from a brain hemorrhage and a major stroke that occured during surgery to repair the hemorrhage (in his words, he had the same operation that Nate did in Six Feet Under). This was all quite a shock as we hadn't heard from him in months (my husband is very lax at keeping in touch, unfortunately) and had had no idea that he was ill. Miraculously, he seems to be recovering quite well, even though the doctors warned his girlfriend that there was a very good chance that he would die or suffer severe paralysis during or soon after the surgery.

On the one hand this news is a bit of a wake-up call, i.e. you better make the most of this life, because none of us knows how long he's got. On the other hand, it's a very worrying reminder about the fragility of life, one that I'm sure we all would like to skip.

I've got a headache and I feel emotionally worn out right now. K is withdrawing into his shell and won't talk to me about how he is feeling, even though it's obvious that he's suffering. I'm hoping this is a temporary state as a result of the news being so out-of-the-blue, but I worry that this is a symptom of the growing distance between us. We should be supporting each other through times like this, not suffering separately in silence.

Anyway, I'm going to go try some cleaning therapy. Maybe decluttering the house will help me to declutter my mind...
:: posted by Ann Howell, 10:03 AM | link | 4 comments |

My dad has an oft-told story where he heard this joke at a party that amused him so much that when he got home in the wee hours of the night he proceeded to call his best friend, who was not terribly amused to be woken up in the middle of the night by my father in hysterics of laughter just to tell him this joke:

"What's purple and has bucket seats? A sports grape!"

Today, someone sent me this link and it had me in absolute fits, tears streaming down my face, and if it were the middle of the night I would have called my dad up to tell him about it. I highly recommend checking it out:

I saw this "word cloud" thing (it's basically a word snapshot of the front page of your blog) on Kath's "Inhospitable" blog and I just had to try it. I love how the word "horrible" is lodged nicely next to the word "husband"... 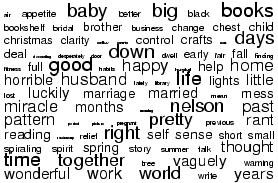 Whoever said life was fair?

*Warning: rant alert!* I'm am issuing a warning about this post, because I know I am about to start a rant that will not reflect very well on my usually understanding, compassionate and loving nature(!). That being said, here goes...

My brother and his new wife (they were married last June) came up for a brief visit this weekend. We had a pleasant evening on Saturday, I cooked a reasonable paella and we sat around listening to 80s music while reminiscing about what a more or less horrible experience high school was. We all went to bed relatively early and the next morning we had an hour or so to sip coffee together before they had to push off (in order to get home for the Super Bowl). During the second cup of coffee they started looking at each other with big silly grins on their faces and after a few nudges from his wife, my brother announced that they had some "news"... You can guess the rest. After trying for a grueling 2 months, their attempts at procreation were successful and she is now 12 weeks along. Now, please keep in mind that I was the epitome of grace upon receiving the news -- kisses all around and only a mild misting of the eyes, which I smiled right through. We talked a bit about the aches and pains of the first trimester and I gave her a couple of my books on prenatal fitness and nutrition. I told them how thrilled I was for them and for their part they were very diplomatic about the whole thing. They left with all of us smiling and hugging. But as soon as I closed the door behind them, I sat down and had a big cry. I tried not to dwell on feeling sorry for myself, but I didn't do a very good job. I was and am truly happy for them, but I couldn't help but feel really gypped by life. I mean, here they are with their life ahead of them, full of dreams for the future and with the undyling love and support of each other to carry them through... and here I am, babyless, marriage hanging by a thread, not being able to think more than a day or two ahead, never mind having long-term hopes and plans. They had no real struggle to achieve what they had and my life for the past few years has been nothing *but* struggle... And that pretty much summed up my thoughts for the rest of the day.

I want so much to be full of undiluted happiness for them, but I am afraid that I won't be able to handle being around them anymore. I won't be able to sit there and listen to them go on about choosing a name and finding suitable day-care and decorating the nursery... meanwhile my child is dead and my life is falling apart.

Oh, this isn't getting me anywhere. I know I warned about the rant at the beginning of this post, but I can't even rant properly without feeling like a horrible shrew. I'm sure in time I'll get used to this situation and I'll find a way to deal with it. In the meanwhile, it's bootstrap time. I've got work to do today, proposals to write, project plans to create. And I will get to it all as soon as I can stop crying...
:: posted by Ann Howell, 8:51 AM | link | 7 comments |

What a wonderful world

Lately, my life has felt a lot that montage in "Good Morning Vietnam", the one that shows the violent war scenes while Louis Armstrong's "What a Wonderful World" plays in the background. There is this gloss of normalcy -- I work, cook, walk the dog, go out with friends -- but underneath everything is horribly ugly. Last week I was feeling vaguely hopeful about getting through this one way or the other, but this week I feel like there will be no happy ending to this story. It's still early days, of course, but I can't help but feel rather discouraged.

I did manage to have a rather nice evening last night. I had dinner with my friends with the new baby and instead of feeling really sad and dispondent thinking about their happy family, I really enjoyed the atmosphere. For a good hour after the meal I held, rocked and played with the baby (while the parents had a much needed respite). I didn't focus on my loss or my failing marriage, I just thought about entertaining the little babbling bundle. I was surprised as anyone at how therapeutic it was.

Anyway, I've finished with work for the week, so today I'm just doing a few household chores and basically taking it easy. I'm not my own best company at the moment, though, so even "taking it easy" is a bit of a chore...
:: posted by Ann Howell, 2:34 PM | link | 2 comments |