Despite everything, I'm trying to keep a sense of humor and these two really cracked me up: 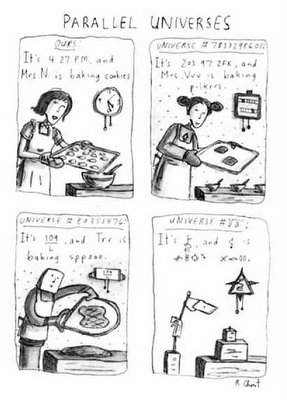 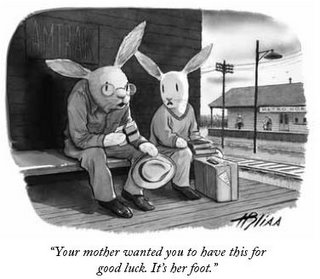 My life on the bookshelf 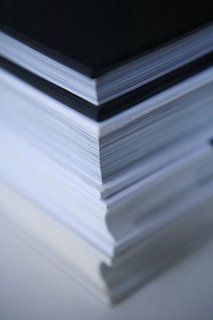 While checking out books at the library yesterday (with only $1.25 in previous late fees -- I'm getting better!), it occurred to me that if any of the library clerks ever checked my lending records, they'd have a pretty good picture of my life over the past 5 years.

Spring 2001: My husband first moves in with me. Lots of books about decorating and home renovation, in an attempt to make the house feel more like "ours".
Spring 2002: We plan a big trip to England, so for a couple of months I took out mostly travel books.
Summer 2003: I get laid off and start taking out books on career building and self-marketing.
Fall 2003: A friend and I decided to try selling crafts together (big mistake which more or less ended our friendship), which means tons of books on candlemaking and sewing.
December 2003: We talk about getting married, so I take a few books out on wedding planning...
Early 2004: Baby's on the way! Endless books on pregnancy, pre-natal fitness, and baby crafts. This lasts until June...
Late June 2004: Loss of baby. No books for a while.
August 2004: Books on grief, trying to conceive after a loss, and lots of Dune (as a distraction).
Fall 2004: Decide to put my energies into starting my own business (basically just going freelance full-time), so armload of books on doing just that.
Spring 2005: As the only bridesmaid for my brother's fiancee living on this side of the Atlantic, it falls to me to host a bridal shower, so I pick up a few books on party planning and bridal crafts.
Summer/Fall 2005: Mostly novels and the occasional book on small business. I have obviously lulled myself into a false sense of contentedness because little did I know that my reading habits would suddenly change.
November 2005: Dr. Phil's "Relationship Rescue" tops the list, if that says anything. Lots of books with the keywords "marriage", "rebuilding", "trust", "hiring a hitman".
And finally yesterday: Unabashedly I pick up books with titles like "After the Affair", "The Mind of the Adulterous Man" and "Beginner Knitting" (I need to keep my hands busy after finding myself in the position of needing to quit smoking again).

Luckily, the faces at the checkout desk change almost weekly, so I'm fairly confident that no one pays any attention to my reading habits. Who knows, maybe this time next year I'll be reading "How to enjoy your new-found happiness, wealth and gorgeous new man while staying centered and down-to-earth". Somehow, though, I doubt it.
:: posted by Ann Howell, 10:02 AM | link | 6 comments |

Things have been so weird around here that I really haven't been able to write at all. Even writing down my thoughts just for myself has been too much to bear. Too much pain, anger and sadness to deal with. But the past few days have stated to bring some clarity, so I find myself able to jot down a few thoughts in here and hopefully I won't wind up scrunched into the fetal position in the corner of the room afterwards.

Seriously though, I feel pretty good. Positive, strong, empowered even. I am fairly confident that no matter what happens that I will not only survive, but thrive. The world is my oyster and, well, I don't want to get into any metaphors about oysters, but you get the picture. I don't know where all of this self-confidence is coming from, but it feels pretty damn good. Especially since a couple of weeks ago I was glancing at my husband's razor blades in the bathroom and having a more than momentary thought about repainting the bathtub a nice shade of red... But luckily I'm way to sqeamish for anything that gory. I was in a very dark place, though, so it feels really good to have come around so dramatically. Not that I spend every day chanting fight songs and envisioning my world domination, but the dark moments no longer have the potency they did just a short time ago.

The long and short of it is that my husband and I are in a holding pattern right now. We are spending a lot of time in self-therapy (meaning we sit around and talk for hours almost every evening), but otherwise are not making any drastic changes to our lives right now. We are still living together and running the household together. This holding pattern may last a couple of weeks or a couple of months or we may decide to try to go the distance after all, we don't know. There are no absolute objectives to this period except to try to gain some clarity about what we want from each other and our lives.

On the upside, I lost 7 lbs. in 7 days on the "too desperately upset to eat" diet. I literally ate nothing for almost 4 days, which was oddly not as unpleasant as it sounds. I did drink some orange juice during those days, so I got a few calories in me, but it wasn't until the end of the fourth day that I managed to choke down a piece of buttered toast. I've generally got my appetite back now, but I'm not the grazer I once was. I started exercising again last week, just to make sure that my metabolism didn't grind to a halt. I think that helped a lot to elevate my mood. My husband is doing slightly worse. He must have lost 15 pounds in the past couple of weeks and he's starting to look like a concentration camp victim. He still hasn't gotten his appetite back and is living mainly on caffeine, nicotine and adrenaline.

Anyway, I've got to get back to work (luckily I have a couple of big projects to keep my mind occuppied) and I can't seem to get a good flow going here, anyway. The only other thing worth mentioning is that there is an ever so slight chance that I'm pregnant, which just beats all. I went on the last round of Clomid right after Christmas and it's just possible that it worked. The kicker? The due date would be the exact same as for Lydia, just 2 years later. But as it's more likely that I'm "late" (and that's a very relative term, since even on Clomid my cycles are very irregular) because of all of this emotional upheaval than a miracle pregnancy, I'm trying not to dwell on it.

There's been a reason for the long gap in posts here. My husband and I are splitting up. I just feel flattened right now and I honestly don't know how I am going to get through this. Happy f*cking New Year...
:: posted by Ann Howell, 5:28 PM | link | 13 comments |